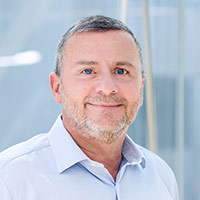 Eric Bonnet-Maes is the Managing Director of LexisNexis Asia for legal and professional business. His region encompasses India, Greater China, South East Asia, as well as Japan and Korea.

He joined LexisNexis France in June 2007, as Sales and Operational Marketing Director, and was later promoted to COO role.

Eric started his career at HP, where he spent close to 11 years in various sales and/or marketing roles within several business units and delivered substantial growth results; he then oversaw Sales & Marketing function in a consulting company, and before joining LexisNexis he was General Manager in charge of global business development of an IT spare parts distribution company headquartered in France.

Eric Bonnet-Maes studied in France where he earned a Master’s Degree in Engineering from UTC (Université de Technologie de Compiègne) and received a MBA from ESSEC Business School.

Eric, who is married and has 3 children, relocated from Paris to Hong-Kong.